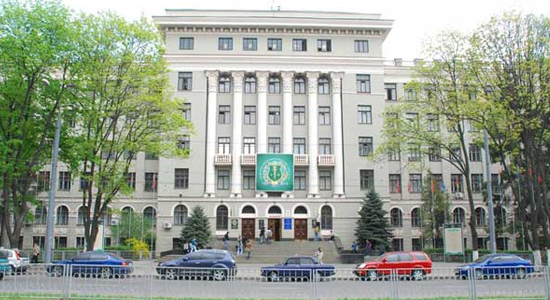 Since 1951 the University has been training specialists for foreign countries of the Eastern Europe, China, Mongolia, and since 1961 students from the countries of Asia, Africa, and Latin America have been studying here. Now, 1900 foreign citizens study at KNMU at the Medical and Dentistry Faculties, at the clinical postgraduate course. More than 3,600 specialists from 86 states of Europe, Asia, Africa, Latin America, and Middle East have graduated from KNMU since 1951.Among them 12 Doctors and 90 Candidates of Medical Sciences, about 200 postgraduates.

The languages of instruction for foreign students are Russian and English.KNMU has become an important centre for international students who need expert teaching in learning. The University is currently training about 7,000 students, among them 2150 foreign citizens, and its academic staff consists of more than 630 teachers, including 102 Doctors of Sciences and Professors, 387 Candidates of Medical Science, 32 members of academies, 17 Honored Scientists. Number of teaching/academic staff involved in teaching foreign students: total – 186, among them: doctors of sciences, professors (%) – 12.4; candidates of sciences, assistant professors (%) – 65.6.