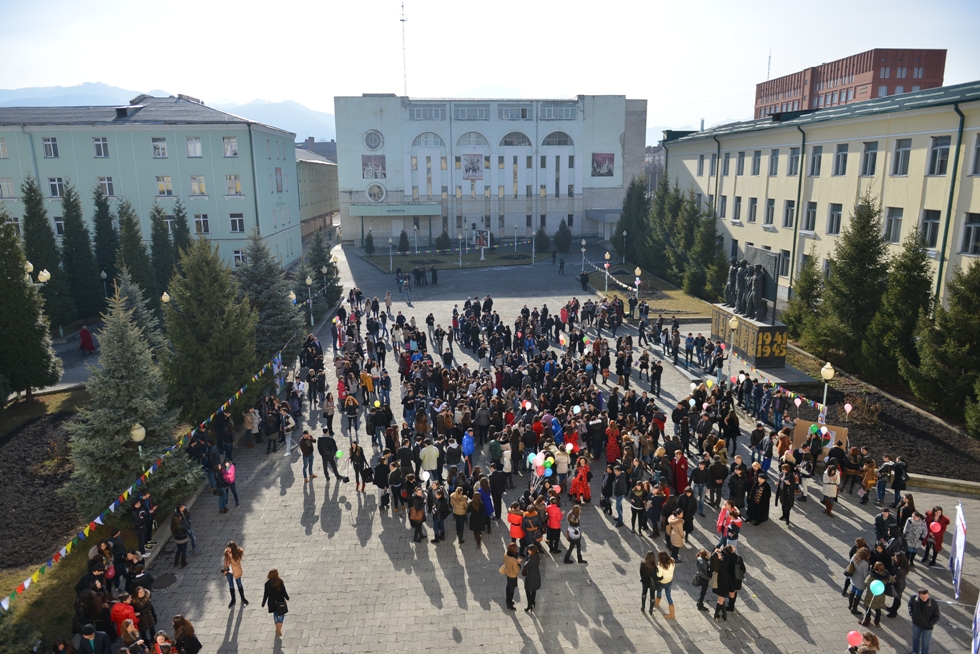 North – Ossetian State Medical Academy is located in the town Vladikavkaz one of the most beautiful towns of the Large Caucasian Mountains. The nature of the North – Ossetia is picturesque and original. Here we can see magnificent mountains, capped with snow and glaciers, green alpine meadows and impetious rivers. The climate of North – Ossetia is temporally continental. The winter here is mild, but summer sometimes is dry due to the influence of the hot middle east desert’s air.

Vladikavkaz is a large densely populated town with multinational population. Various cultures are integrated here. There are many possibilities for sport and cultural rest with convenience transport communication.

NOSMA is one of the best ones in the North Caucasus. International activity was put in use from 1991, for these period about 350 specialists have been prepared for foreign countries such as Syria, India, Lebanon, Morocco, Sudan, Dzhibuti, Greece, Baltic States, etc.

NOSMA was founded in 1939. For the period of its existence, over 21 000 highly qualified specialists have graduated from it. The graduates of NOSMA successfully work not only in the republic but in all regions of Russian Federation and abroad too. At the 41 chairs of the academy work 384 professors and teachers: 53 Doctors of Medical Sciences, 34 Professors, 242 Candidates of Medical Sciences, and 62 Assistant Doctors.

There are 6 faculties in the academy: medical, pediatric, Dental, pharmaceutical, medico – preventive and the faculty of post-graduate education (internship, residency, post graduate course). The faculty of post-graduate education is preparing to graduate in 15 specialties, clinical residency in 31 specialties. Annually specialization and advanced training in 25 specialties is conducted in academy. In NOSMA operates department of pre-university training and further education for foreigners.

NOSMA has its own clinic and stomatological polyclinic with modern equipment. Clinical chairs of the academy are based in large healthcare institutions of the republic, the bedspace of which is more than 6300 locations. Along with the professional training we have all the conditions for research work. There is research laboratory in the Academy and Institute of biomedical research of Vladikavkaz scientific center of Russian Academy of Sciences and of RNO-Alania Government. In the Academy operates Students’ Scientific Society and association of young scientists. Students of the Academy take part in the international conferences and workshops. Students have access to a library with rich fund of special literature and fiction numbering more than 428000 copies of publications. In the library operates an electronic reading room equipped with computers with Internet access. In the Academy is opened the Testing center, the centre of the practical training, which is designed for classroom and extracurricular self-study and is equipped with modern equipment: dummies, phantoms, clinical examination of the patient simulators. There was created multimedia class designed to showcare educational films, video collection and presentation.

On the territory of the Academy there is a canteen with a varied diet. Accommodation is available in the hostel a 5-minute walk from the Academy building. All conditions for the maximum development of creative and sports activities of the person: work collectives of amateur performances, sports clubs operate here. The Academy has four sports and fitness centers: shooting gallery, a sports ground. There are museums: of Health Organization of North-Alania, biological and anatomical museums at the territory of the Academy.

All the Russian Medical instituitions are constructed in a campus system i.e. educational buildings, library, mess, hostels, sport complexes, play ground, cultural complexes and park are situated in one campus. Beside this all universities have their own security surveillance system with its own commando guards for the safety of its students and campus.

Over 600000 books written by Russian and foreign authors are available at average in a university library. The library is connected with the World Med Line System, where all information regarding the latest findings in Medical field are updated. It has three reading halls with a capacity of more than 200 seats.

Two more de luxe halls of residence were opened in 2010 to accommodate more than 1000 students. They are located in Moskovskaya and B. Khmelnitsky streets and offer comfortable rooms, each has a cable TV, a fridge, a shower cabin. Equipped with external video surveillance system and a card reading system on entry doors, it makes them the safest place for living. Among the facilities are computer classes with an Internet access, laundry rooms, performance halls and fitness rooms. Here you will find all necessary conditions to pursue studies and have adequate rest. Accommodation fee is less than 5 % of regular scholarship. All international applicants are placed at halls of residence should they opt for it.

Here are many hostels, which can accommodate more than 2000 students. All the hostels are flat type i.e. with attached bathroom, toilet and kitchen. The hostels are centrally heated. The hostels are fully furnished. The basic system is two students in one room. Separate arrangements for boys and girls.